May 25, 2021 [Musanze, Rwanda] – A scientific study published today in Scientific Reports [link] suggests that new health challenges may be emerging as a result of conservationists’ success in pulling mountain gorillas back from the brink of extinction.

The study, the first-ever species-wide survey of parasite infections across the entire range of the mountain gorilla, was conducted by an international science team led by the Institute of Vertebrate Biology, Czech Academy of Sciences; University of Veterinary Sciences Brno, Czech Republic; Gorilla Doctors; and the Dian Fossey Gorilla Fund; in collaboration with the protected area authorities of Rwanda, Uganda and the Democratic Republic of Congo (the Rwanda Development Board, the Uganda Wildlife Authority and l’Institut Congolais pour la Conservation de la Nature, respectively).

All mountain gorillas live in fully protected national parks in Rwanda, Uganda and DR Congo, where the potential for spatial expansion is extremely limited due to dense human communities living nearby. Consequently, as gorilla population densities within the protected areas increase, their susceptibility to infectious diseases may also.

The Virunga mountain gorilla population has not increased uniformly across its habitat, possibly due to varying ecological conditions that are linked to different vegetation types. Additionally, in areas of the Virunga Massif where some of the highest growth rates occurred, the mountain gorillas experienced major changes in their social structure, leading to a threefold increase in group densities.

Clinical gastrointestinal diseases linked to helminths, a type of parasitic worm, have been recorded in mountain gorilla populations in both the Virunga Massif and the Bwindi Impenetrable Forest, and may pose a threat to these endangered animals.

“Gastrointestinal disease from helminths is typically asymptomatic in wild non-human primates,” says first author Dr. Klara Petrzelkova, senior researcher at the Czech Academy of Sciences. “But host and extrinsic factors can alter helminth transmission and host susceptibility, which may exacerbate negative effects of infections on gorilla health. This study has put a spotlight on these factors.”

The study elucidates the drivers and patterns of helminth infections and provides a comprehensive foundation for future assessments of the impact of these parasites on gorilla population dynamics. Strongylid and tapeworm infections were quantified in fecal samples collected from night nests and from individually identified gorillas living in five social groups using fecal egg counts.

“Detecting significant differences in parasite burdens among gorilla family groups is critical information for guiding our decisions in providing life-saving veterinary care for this endangered species,” said Julius Nziza, Head Veterinarian in Rwanda for Gorilla Doctors, which is a collaboration of the Mountain Gorilla Veterinary Project (MGVP) and the University of California Davis’ Karen C. Dryer Wildlife Health Center.

“The knowledge we acquired from this study will help develop future plans for protecting these endangered primates and their critical habitat” said Felix Ndagijimana of the Dian Fossey Gorilla Fund.

This highly collaborative study points to new challenges emerging as possible “side effects” of the remarkable conservation success of the past few decades. Unraveling the patterns of parasite infections in both gorilla populations, evaluating host exposure to infective parasite stages, and studying susceptibility to infection and its consequences on host health will be an important next step for the continued success and survival of this and other endangered animal species with small, isolated populations. 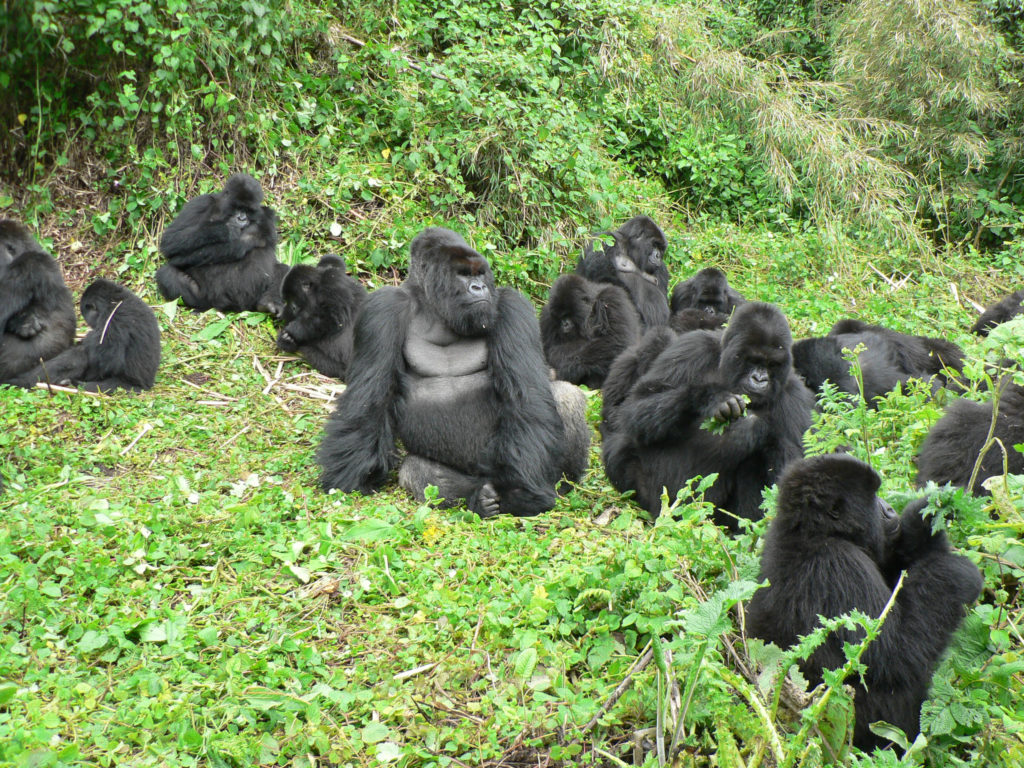 Scientists from around the world, including at the Fossey Fund, participated in this species-wide survey of parasite infections across the entire range of the mountain gorilla. Seen here are gorillas from Pablo’s group. (Photo by The Fossey Fund) 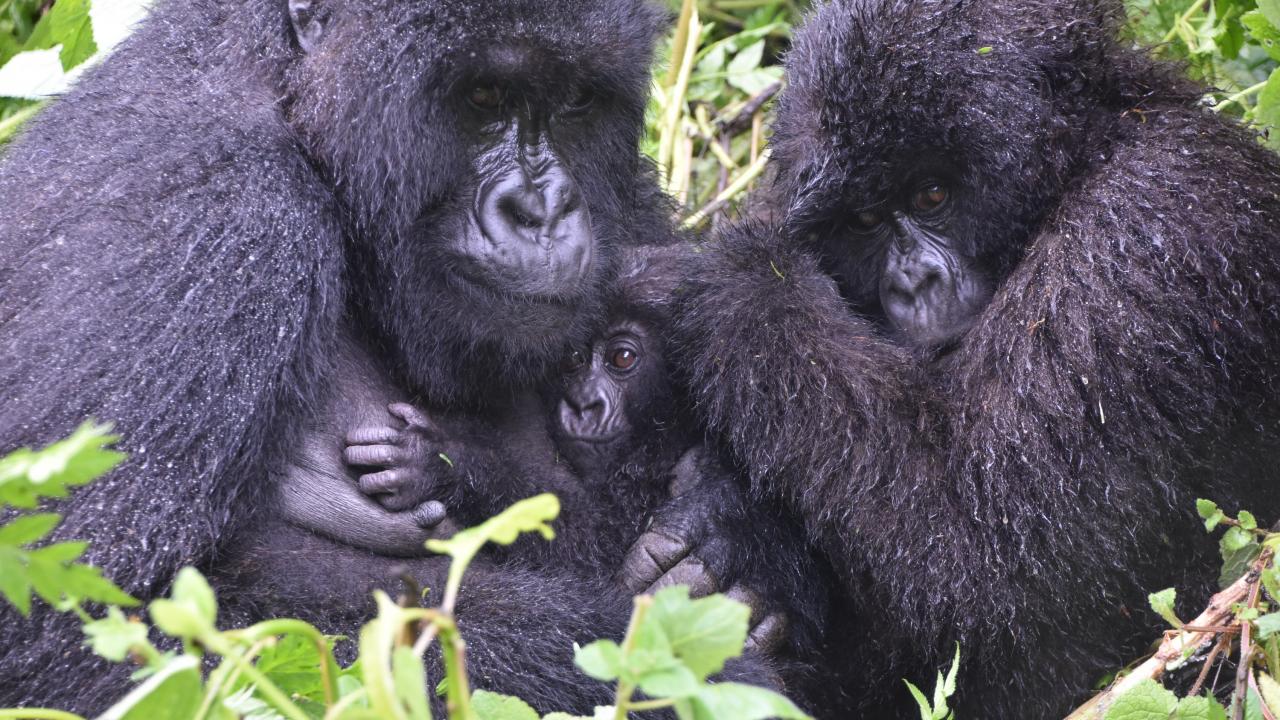 A mountain gorilla family in Rwanda’s Volcanoes National Park in 2020. (Photo by The Gorilla Doctors) 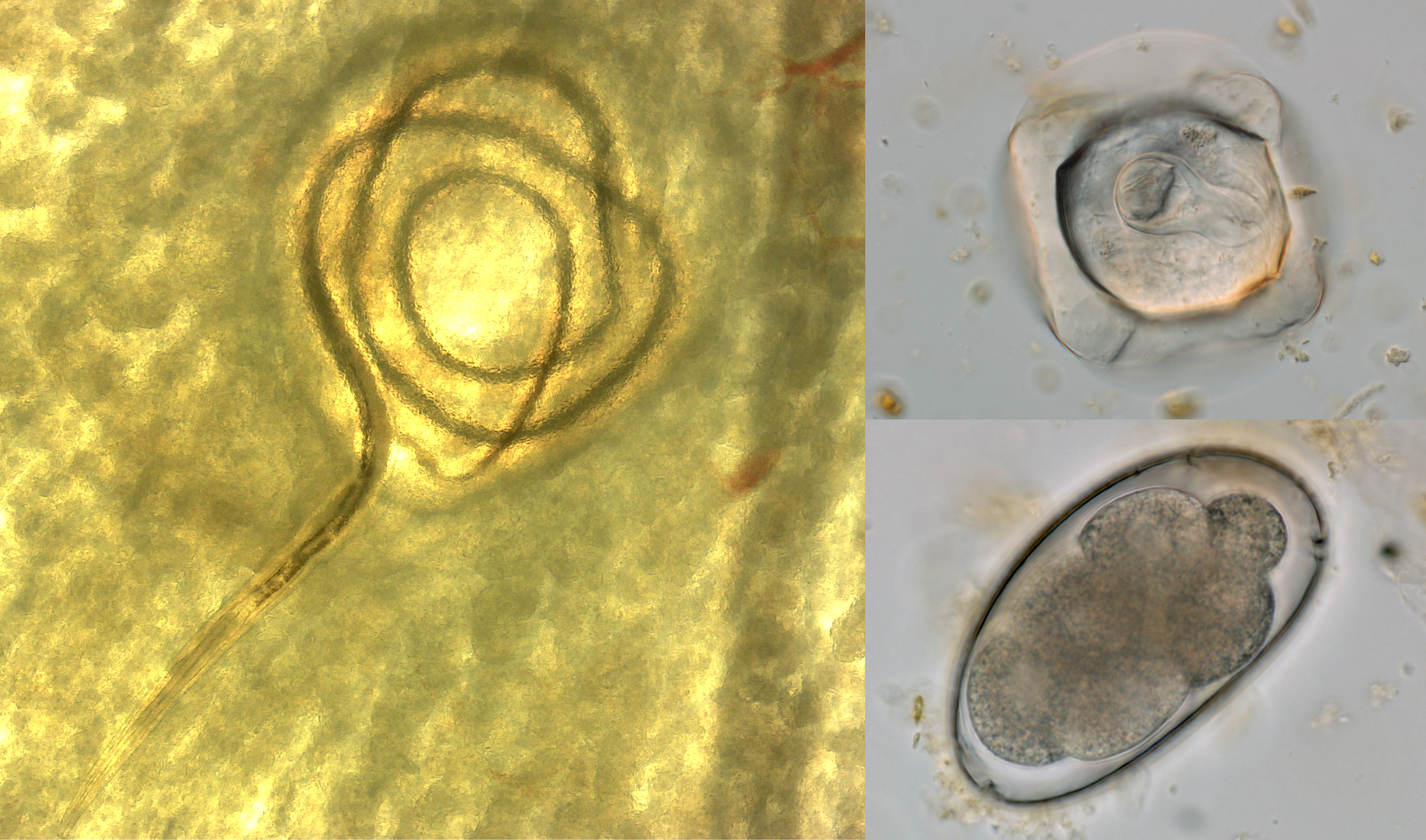 Parasitic worms may be embedded in the mucosa of the stomach (left) impairing the proper function. Eggs (right) of tapeworms (up) and strongylid nematodes (down) may be observed and quantified under a microscope when performing so-called coproscopic analysis. (Foto by B. Červená, IVB CAS)